My comments:  I feel so badly not really liking a book of Judith Viorst's poetry!  I loved If I Were in Charge of the World, have read it over and over and shared poems with lots and lots of kids.  But after reading through these poems once I felt pretty "blah" about them, so I read them through again today.  I still feel blah about them....some seemed forced, some I found really hard to find any rhythm, words were put in odd sequences in order to fit some sort of rhyming pattern, and some of the thoughts and thinking don't seem to gel with the thoughts and thinking of the kids I've worked with for the last ten years or just made me roll my eyes.  I didn't give it a 1...I'll give Ms. Viorst the benefit of the doubt because she's always been high on my list...but I'm not keen on these poems at all.  And I feel really, really bad about that! 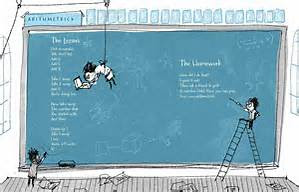 I liked this poem a bit, the last one in the book, but even some of it (cadence, wording, rhythm) didn't do it for me::

Too old to need a night-light and
Too young to drive a car.
Too young for War and Peace, too old
For Where the Wild Things Are.
Too young to drink a latte and
Too old for sippy cups.
I'm in between and sometimes
I can't tell the downs from ups.