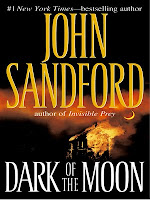 Both my husband and son have enjoyed the Lucas Davenport "Prey" series, written by John Sandford, so when Brian began this series, I decided to join him. Good decision.

Virgil Flowers works for some sort of Minnesota crime bureau under the aforementioned Lucas Davenport. He's sort of a one-man solo investigator that is sent out to rural communities to help on murder cases. When he arrives in small town Bluestem to help the locals investigate the murder of an elderly couple, he comes upon a blazing house fire. It looks like another elderly man has been murdered. This one, a wealthy schemer with a history of womanizing, is hated by just about everyone in town. Amid a smidgeon of romance and quite a bit of humor (he wears rock tee shirts everyday, chosen to match his mood and the case/s he's working on), Flowers leaks information in the right places, asks the right people the right quesitons, and flushes out the killer in style. Excellent murder mystery. Great protagonist.
Posted by Chris at 6:47 AM