My comments:  Perhaps the part of Margo was miscast for me, because I didn't like her (particularly) couldn't figure out why Q was so taken with her, and couldn't even figure out what motivated her.  However, the parts with Quentin and his two best friends were priceless and special.

RT Summary:  Adapted from the bestselling novel by author John Green ("The Fault in Our Stars"), PAPER TOWNS is a coming-of-age story centering on Quentin and his enigmatic neighbor Margo, who loved mysteries so much she became one. After taking him on an all-night adventure through their hometown, Margo suddenly disappears--leaving behind cryptic clues for Quentin to decipher. The search leads Quentin and his quick-witted friends on an exhilarating adventure that is equal parts hilarious and moving.Ultimately, to track down Margo, Quentin must find a deeper understanding of true friendship--and true love.
Posted by Chris at 5:58 PM No comments:

First line/s: We four sisters are sitting in the courtyard at dusk in what passes for peace in our house.  Well-brought-up girls do not fidget nor fume nor ever betray the least impatience or boredom.  But it is so hard to sit still when all I can think about is how I am going to sneak out of the house tomorrow to do the thing my father would never, ever give me permission to do.

My comments:  This is a story of class and rank and color, taking place in a world woven by the imagination of Kate Elliott. It's a story of five women - four sisters and their mother, who have had very few choices in their lives, but seem to have cleverly stayed on the shaky path they each have been able to make for themself. Of course those paths are fraught with disconcerting "uh-ohs" at every turn, but the choices they are able to make actually win out - or come close.  They all have an unsteady place in the society woven in this book, and as things go from okay to bad to worse, the story flies along unceasingly. Fast.  Gritty.  I really, really enjoyed it and couldn't put it down.  Sure, some of it was not-quite believable, but I didn't care.  Jessamy, the protagonist, is a winner - and I don't mean in just the court of fives!
I've read some negative reviews about this book. To each her own taste. I truly enjoyed it, every awkward, eye-rolling happening!
(I wonder if the next in the series is going to be from the missing-for-most-of-this-book Bettany's point of view?)

From the copyright page:  When a scheming lord tears Jes's family apart, she must rely on her unlikely friendship with Kal, a high-ranking Patron boy, and her skill at Fives, an intricate, multi-level athletic competition that offers a chance for glory, to protect her Commoner mother and mixed-race sisters and save her father's reputation.

Goodreads Summary:
On the Fives court, everyone is equal.

And everyone is dangerous.Jessamy’s life is a balance between acting like an upper-class Patron and dreaming of the freedom of the Commoners. But away from her family, she can be whomever she wants when she sneaks out to train for the Fives, an intricate, multilevel athletic competition that offers a chance for glory to the kingdom’s best competitors.     Then Jes meets Kalliarkos, and an improbable friendship between the two Fives competitors—one of mixed race and the other a Patron boy—causes heads to turn. When Kal’s powerful, scheming uncle tears Jes’s family apart, she’ll have to test her new friend’s loyalty and risk the vengeance of a royal clan to save her mother and sisters from certain death.     In this imaginative escape into an enthralling new world, World Fantasy Award finalist Kate Elliott’s first young adult novel weaves an epic story of a girl struggling to do what she loves in a society suffocated by rules of class and privilege.
Posted by Chris at 5:33 PM No comments:


Nope, decided not to continue with this....not that I disliked it, more that by page 93 I was bored and not interested - at this time - to continue.  I'm guessing I'll come back to it sometime in the future, especially if my students read it, so that I can discuss it with them.
Posted by Chris at 10:31 AM No comments:

PICTURE BOOK - What REALLY Happened to Humpty?: From the Files of a Hard-Boiled Detective by Jeannie Franz Ransom 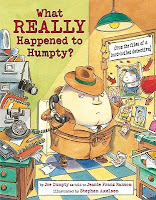 My comments:  This book cracks me up every time I read it (I love all the word play) and it works perfectly as an introduction to the mystery genre for my fourth graders.  This goes into my picture-books-with-a-little-more-intricateness/intricativity (how's that for taking a little touch of freedom with words? Try saying intricativity three times fast!)

Goodreads:  Humpty Dumpty had a great fall. Or, as his brother Detective Joe Dumpty thinks, was he pushed? This case isn't all its cracked up to be. Suspects are plenty (as are the puns) in this scrambled story of nursery rhyme noir. Was it Little Miss Muffet? There's something not right about her tuffet. Or could it have been Chicken Little, who's always been a little cagey? Or was it the Big Bad Wolf, who's got a rap sheet as long as a moonless night? Joe's on the beat and determined to find the truth. Readers of all ages will delight in the word play and hilarious illustrations in this mystery of what really happened to Humpty Dumpty on that fateful day.
Posted by Chris at 3:42 PM No comments:

Chaos Walking #1
listened to audio cd.
2008 Candlewick
479 pgs.
YA SciFi/Dystopia
Finished 9-7-15
Goodreads rating:  3.95
My rating:  Really didn't like it at all - too upper-level stressful, no down time....
Setting: a small planet similar to earth in a faraway place

First line/s:  "The first thing you find out when yer dog learns to talk is that dogs don't go nothing much to say.  About anything."

My comments:  I've waited a few days to see if my original opinion abated a bit - but it's only grown stronger.  I love the premise of this book, but I was put off by the stress-level and ugliness.  I listened to it - and the narrator did a wonderful job of depicting what Todd felt, saw, heard -- but it was incredibly overwhelming to me, my stomach and jaws were clenched, I dreaded returning to it and almost didn't finish it.  I didn't realize it was the first in a series, so was utterly disappointed at the so-called end.  So-- Mr. Ness did a grand job in eliciting feeling and emotion, but reading for me is pleasure and I found not even the tiniest pleasure in the reading of this book.  I've read others' reviews and I'm really glad that it's been enjoyed by so many!

Goodreads Summary:  Prentisstown isn't like other towns. Everyone can hear everyone else's thoughts in an overwhelming, never-ending stream of Noise. Just a month away from the birthday that will make him a man, Todd and his dog, Manchee -- whose thoughts Todd can hear too, whether he wants to or not -- stumble upon an area of complete silence. They find that in a town where privacy is impossible, something terrible has been hidden -- a secret so awful that Todd and Manchee must run for their lives.

But how do you escape when your pursuers can hear your every thought?
Posted by Chris at 10:55 AM No comments: