Jason Segel (who co-wrote and produced), Emily Blunt (both were superb)

Good comedy - a touch of seriousness, all worked together well.
Posted by Chris at 10:48 PM No comments:

A group of British retirees meet for the first time at the airport in London, departing for what they think will be a snazzy hotel in India that will allow them to live more cheaply than in expensive London.... comfortably.   Dev Patel is the youngest son who is trying to get his father's rundown Marigold Hotel open and back on its feet.  Needless to say, the joint isn't exactly what anyone expected.  But they all bond...in their own ways...and, for the most part, take their new lot in life and go for it.  All the characters are wonderfully portrayed.  It's a rich story in a great setting and I loved every moment of it!
Posted by Chris at 6:49 AM No comments: 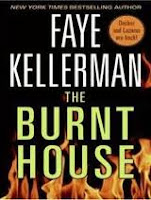 LA Homicide Detective Peter Decker investigates the disappearance of a woman when a small commuter plane traveling from LA to San Jose crashes into a house in a in a fiery explosion.  Roseanne Dresden is missing, and although she was a flight attendant and her husband says she was on this flight, she was not working and her body cannot be found.  This opens up all sorts of questions and leads investigators to another disappearance from many years before.  The story was gripping and interesting, and although I wasn't crazy about the previous Faye Kellerman that I read, I will now search out and try some other Peter Decker mysteries.
Posted by Chris at 1:49 PM No comments:

unrated (1:34)
opened 4-13-12
saw at the Loft, by myself - lots of folks there on a Sunday afternoon.
RT critics: 97 RT Audience: 91
my rating:  Really loved it/5.5
Directed by Philippe Fatardeau
Music Box Films
in French, with subtitles

A 55-year old Algerian immigrant becomes a teacher in a Toronto elementary school.

PG-13 (2:03)
Limited release 12/30/11
This was my birthday movie (4/30/12) at Crossroads or the Loft, I'm writing this long afterwards and I can't remember..... (then went to free dinner at Claim Jumper afterwards.
RT critics:  99 RT audience:  93
my rating:  6/It was awesome
Director:  Asghar Farhadi
Sony Picture Classics
Winner of the Academy Award for the Best Foreign Film

Setting:  Contemporary Iran
Very engrossing, even with some long, slow-moving scenes.  Every movement - body and facial - have emotion and reason  There are a few places at the beginning that were unclear to me - the wife is asking the husband for a divorce because she wants to "go abroad" -- and it seems as if she wants him and their 11-year old daughter to come, that perhaps they may have even planned for this and requested visas together -- but the husband refuses to lave his house-bound father with Alzhheimers.  There is something in there about 40 days, and two weeks, and then she goes to her mother's a short car ride away.  Between reading and listening, something got lost in the translation for me, I guess.

The daughter, Termah, is bright, solemn, and smart.  She is being tutored for exams.  She has chosen to live with her father (because she knows her mom won't leave the country without her).  Her father, Nader, who is a banker, has hired a woman (who brings her 4-year old daughter) to care for his father during the day while he works.  This is where the drama really begins.

Great movie.  It does seem to leave a major questions unanswered (what happened to the money that was supposedly stolen) and the ending leaves you trying to chose one or two scenarios that might be the possible outcome -- but this is GOOD thinking, GOOD questions, thinking that stays with you...

Excellent acting on all counts - from the four major players to the two children to the senile grandfather.  A really good movie.
Posted by Chris at 1:28 PM No comments: