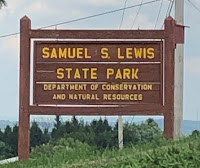 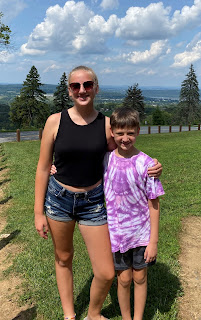 great view of the Susquenna River between Wrightsville and Columbia, PA

lots of big rocks for the kids to climb

less than an hour from home 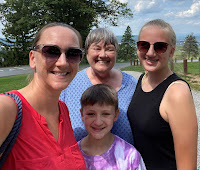 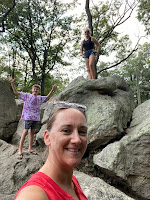 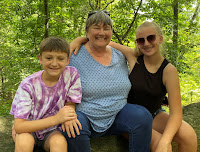 First line/s:  "Darkness.  It swirled around him deep and thick, eating the light and leaving nothing behind but an inky void."

What I posted on GoodReads:  Flipping back and forth between many pov's, the interesting, though gritty, mystery continues.

My comments:  Talk about ending on a cliffhanger!  I'm so glad I have the next book, the final book, in the trilogy ready and waiting.   Flipping back and forth between three Chicago cops, different girls who have been abducted, an FBI agent, and the diary of Bishop, the story comes at you from all angles.  Anson Bishop, an incredibly smart serial murderer - and a particularly gruesome one at that - is still at it, this time having an accomplice.

Goodreads synopsis:  In the thrilling sequel to The Fourth Monkey, a new serial killer stalks the streets of Chicago, while Detective Porter delves deeper into the dark past of the Four Monkey Killer.
Detective Porter and the team have been pulled from the hunt for Anson Bishop, the Four Monkey Killer, by the feds. When the body of a young girl is found beneath the frozen waters of Jackson Park Lagoon, she is quickly identified as Ella Reynolds, missing three weeks. But how did she get there? The lagoon froze months earlier. More baffling? She’s found wearing the clothes of another girl, missing less than two days. While the detectives of Chicago Metro try to make sense of the quickly developing case, Porter secretly continues his pursuit of 4MK, knowing the best way to find Bishop is to track down his mother. When the captain finds out about Porter’s activities, he’s suspended, leaving his partners Clair and Nash to continue the search for the new killer alone.          Obsessed with catching Bishop, Porter follows a single grainy photograph from Chicago to the streets of New Orleans and stumbles into a world darker than he could have possibly imagined, where he quickly realizes that the only place more frightening than the mind of a serial killer is the mind of the mother from which he came.
Posted by Chris at 6:23 AM No comments:

112. A Room Full of Bones by Elly Griffiths

First line/s:  "The coffin is definitely a health and safety hazard."

What I posted on Goodreads:  Another interesting mystery including a family museum, a horse farm, a 14th century bishop that turns out to be a female (!) and all sorts of ups and downs with parenting...including by Kate's father and Kate's father's wife, Michelle.....

My comments:  The mystery is about the Smith family, their horse farm, drug dealing, aboriginal bones. and a 14th century bishop(who turns out to be female) in the Smith Museum.  It's also about Harry Nelson getting sick and his wife, Michelle, coming to terms witht he fact that he is Kate's father and needs to be involved in her life (very good of Michelle, i think).  At the end of the book, Ruth and Max are becoming a couple.  Upcoming things to contemplate:  Nelson's sidekick is pregnatn, and although she is married, she has had a fling with Casbad.  A good story, though I wish Griffiths didn't use quite as many poinst-ov fivew as she did.  It all come together well, and was quite interesting to listen to.

Goodreads synopsis:  Combine a splash of Alan Bradley with a pinch of Kathy Reichs and you have a gripping new Ruth Galloway Mystery -- a good-hearted mystery series with a dark edge.
Set in Norfolk, England, A Room Full of Bones embroils, once again, our brainy heroine in a crime tinged by occult forces. On Halloween night, the Smith Museum in King's Lynn is preparing for an unusual event -- the opening of a coffin containing the bones of a medieval bishop. But when forensic archaelogist Ruth Galloway arrives to supervise, she finds the curator, Neil Topham, dead beside the coffin. Topham's death seems to be related to other uncanny incidents, including the arcane and suspect methods of a group called the Elginists, which aims to repatriate the museum's extensive collection of Aborigine skulls; the untimely demise of the museum's owner, Lord Smith; and the sudden illness of DCI Harry Nelson, who Ruth's friend Cathbad believes is lost in The Dreaming -- a hallucinogenic state central to some Indigenous Australian beliefs. Tensions build as Nelson's life hangs in the balance. Something must be done to set matters right and lift Nelson out of the clutches of death, but will Ruth be able to muster herself out of a state of guilt and foreboding in order to do what she does best?
Posted by Chris at 7:17 AM No comments: