1st line:  "In retrospect, maybe I shouldn't have freed the tiger."
Setting:  Contemporary Beresford, NH
OSS:  After Cara and Edward's dad, Luke Warren, a famous wolf scientist, suffers severe brain trauma in a car accident, the estranged family tries to decide what's the next step....sustaining his life or pulling the plug?

There were many things I liked about this story.  Each short chapter was in the voice of one of the key players....Luke, the father, Edward, the son, who had left at 18 for Thailand because of some sort of argument with his dad, Cara, the younger sister who lives with and idolizes her dad, Georgie, the ex-wife and Edward and Cara's mom, and Joe Ng, Georgie's new husband and the lawyer that defends Edward.  Each character is given his own font.  Luke's pieces, all italicized, are the story of the wolves and his obsession with them.

This is the story of a family that has had a tough time from the beginning.  When you have a dad that would rather live in the wild with wolves, you have a dysfunctional family, right?  So for most of his adult life Luke was lost between two worlds, never able to fully participate in either (except for the two years he actually lived in the Canadian woods and joined a pack).  There are little mysteries to be solved, actually quite evident ones, that come out as the trial proceeds.  What trial?  The trial that pits brother against sister in who will have legal guardianship of their father.

If you're an animal lover, especially a lover of wild animals, the story would probably be quite enthralling.  For me, a little bit of the wolf information went a long way.  I guess it was entirely based on the work of Shaun Ellis, a guy in England on whom the character of Luke is based.

My daughter loves Jodi Picoult, so I thought I'd try this new book.  The only one I read previously was not a favorite.  Laura says this one has not had the greatest reviews.  I think I'll wait awhile before reading another.
Posted by Chris at 12:55 PM No comments:

Setting: 1997, in a tiny town called Carter Crossing, Mississippi, home to Fort Kelham, an army base used as training grounds for special forces troops.
OSS:  When Jack Reacher is dispatched to Carter Crossing, Mississippi to make sure the army isn't involved - or even mentioned - in the murders of three beautiful young women, he teams up with local sheriff Elizabeth Devereaux to get to the bottom of it all.

This is the story of how ... and why ... Jack Reacher left the army.  It's the story of his last job as an Army major.  It is Jack Reacher through and through, his cleverness, his seeing the minute clues that others would never even consider, and it's also about his stance for what's good, and what's right.  The way he decides to deal with it all at the very end of the book does bother me somewhat, but I guess that's what makes Reacher Reacher, right?  He trutsts... and lusts after ... Devereaux right off the bat, but when she becomes implicated in the crimes, you can't help but wonder.  Child keeps the reader thinking every step of the way.  The story went really fast and was really good.
Posted by Chris at 7:44 AM No comments:

Setting:  contemporary Massachusetts seashore community
OSS:
1st line/s:  "On the day I became redundant, I began to walk.  Okay, not right away.  First I lay in bed and savored the sound of the alarm not going off.  I'd been hearing that stupid beep at the same ridiculous time pretty much every workday morning for the entire eighteen years I'd worked at Balancing Act Shoes."

The narrator of this story reminds me of the voiceover commercial voice of a local ambulance-chaser law firm ad.  In some places it is SO not what I want to hear, putting a slower cadence with drawn-out wording that gives a different affectation than of what I'm hearing in my head.  Oh well, the story was okay, and I also had the book ot look at, so I read over some of the parts I'd listened to in the car.
Posted by Chris at 2:44 PM No comments:

Setting:  some LA, but most of the action takes place in the desert near the Dalton Sea, Indio/ Coachella/Palm Desert/Palm Springs in southern California

Written in an interesting way - the point-of-view switches, as does the time.  It might go from Elvis Cole in the current time to Joe Pike six days later to the kidnapped couple in the time between.  Keep you on your toes.  I didn't think, at first, that I was going to like it but I did.  Elvis Cole's sections are always in the first person, all the rest of the characters aren't, just in descriptive mode.

This time, Cole and Pike are assisted by , a government mercenary who'll try anything and follows orders from Joe Pike really well.  I see him a tall, cute, blonde, always laughing, nothing bothering him.  His hidden military/government credentials seem to be able to get him out of any predicament.....I bet he's going to show up again.

Elvis is hired by Nita Morales, a mom whose college daughter Christa and her boyfriend, Jack Berman,  have mysteriously disappeared.  She is afraid they've eloped, but this is very far from the truth...they've been kidnapped, in the wrong place at the wrong time when a group of coyotes who were transporting people from all over the world across the border are hijacked by really bad guys called bajadores. These are bandits that steal from bandits.   Life has no meaning to them.  They're just plain mean and heartless---I hate the thought that there really are people in the world like this!
Posted by Chris at 9:17 AM No comments:

POEM - How to be a Poet - Wendell Berry 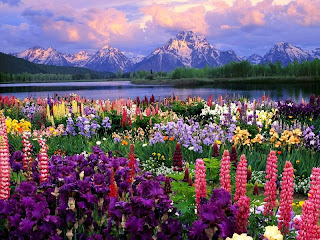 How To Be A Poet

i
Make a place to sit down.
Sit down. Be quiet.
You must depend upon
affection, reading, knowledge,
skill—more of each
than you have—inspiration,
work, growing older, patience,
for patience joins time
to eternity. Any readers
who like your poems,
doubt their judgment.

ii
Breathe with unconditional breath
the unconditioned air.
Shun electric wire.
Communicate slowly. Live
a three-dimensional life;tay away from screens.
Stay away from anything
that obscures the place it is in.
There are no unsacred places;
there are only sacred places
and desecrated places.

iii
Accept what comes from silence.
Make the best you can of it.
Of the little words that come
out of the silence, like prayers
prayed back to the one who prays,
make a poem that does not disturb
the silence from which it came.

Thanks, Lisa, for posting this on Facebook. I like it a lot. And today is April 1st, the first day National Poetry Month. The birds are singing...merrily and loudly enough to wake me up on this gorgeous Sunday morning. Life is good.
Posted by Chris at 8:51 AM No comments: