This was a reread - actually, I read it the first time and listened to it this time.  I didn't even remember reading it, though I had the same reactions to it both times.  Ella was entranced, loved it.

My comments:  I really liked this movie.  Loved the actors & acting, loved the story, loved everything about it.  Not your usual big screen blockbuster, but a movie that makes you think ... a lot.  It touches on being called a retard, down syndrome, the power of prayer, alcoholism, kindness.....  Good movie.

46. The Professional - Robert B. Parker

#37 Spenser
listened to cd - audio read by Joe Mantegna
2009 Random House audio
289 pgs.
Adult mystery
Finished in July, 2015 - back and forth from PA to ME?
Goodreads rating: 3.79
My rating: I didn't rate this in July, I'm now doing this bookkeeping in December, so I can't remember my immediate reaction to the story.  I'll go with a 4....

Goodreads synopsis:  A knock on Spenser's office door can only mean one thing: a new case. This time the visitor is a local lawyer with an interesting story. Elizabeth Shaw specializes in wills and trusts at the Boston law firm of Shaw & Cartwright, and over the years she's developed a friendship with wives of very wealthy men. However, these rich wives have a mutual secret: they've all had an affair with a man named Gary Eisenhower- and now he's blackmailing them for money. Shaw hires Spenser to make Eisenhower "cease and desist," so to speak, but when women start turning up dead, Spenser's assignment goes from blackmail to murder.
As matters become more complicated, Spenser's longtime love, Susan, begins offering some input by analyzing Eisenhower's behavior patterns in hopes of opening up a new avenue of investigation. It seems that not all of Gary's women are rich. So if he's not using them for blackmail, then what is his purpose? Spenser switches tactics to focus on the husbands, only to find that innocence and guilt may be two sides of the same coin.     With its eloquently spare prose and some of the best supporting characters to grace the printed page, The Professional is further proof that "[t]here's hardly an author in the crime novel business like Parker"
Posted by Chris at 10:38 AM No comments:

My comments:  Same old wonderful Virgil Flowers....clever and funny and smart.  This one seemed to drag a bit, though.  I do love the way that Sandford adds the perspective of the antagonist/s as well as the protagonist, but much of this seemed repetitive and unnecessary.....or maybe it was just the mood I was in as I drove....

Goodreads synopsis:  In Southeast Minnesota, down on the Mississippi, a school board meeting is coming to an end. The board chairman announces that the rest of the meeting will be closed, due to personnel issues. “Issues” is correct. The proposal up for a vote before them is whether to authorize the killing of a local reporter. The vote is four to one in favor.
Meanwhile, not far away, Virgil Flowers is helping out a friend by looking into a dognapping, which seems to be turning into something much bigger and uglier—a team of dognappers supplying medical labs—when he gets a call from Lucas Davenport. A murdered body has been found—and the victim is a local reporter.
Posted by Chris at 8:11 PM No comments:

Civil Rights and Being Black in America 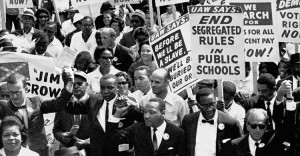 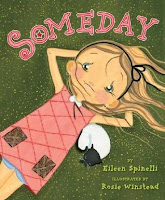 Someday
I am going to be
a great artist.
I will wear a blue smock.
I will carry my paints
to the beach
to paint the sea.
A very rich person
will offer to buy my painting
for two million dollars.
But I will smile.
And I will say:  “I’m sorry,
this painting is not for sale.
It is a gift for my art teacher.”
Someday…


A girl fantasizes things that will happen to her “someday,” then shows the current happening that prompted each thought.  There are 6 (including the one above):
Someday I will make friends with a dolphin.’Someday I will dig for dinosaur bones.
Someday I will be invited to the White House to have lunch with the president.
Someday I will be an animal scientist.
Someday I am going to be a gymnast in the Olympics.
Someday I will spend the night in Egypt.
(ending with Tonight I’m sleeping on the bottom bunk with Roger, who is afraid of monsters and the dark.)


Goodreads:  It’s hard to be content with the present moment when you are little. The future has infinitely more possibilities!
Here, the prolific and poetic Eileen Spinelli offers us the opportunity to truly enter the mind and heart of a little girl whose dreams reach well beyond today. With Spinelli’s gift for capturing the authentic experience of a child and Rosie Winstead’s utterly accessible and adorable artwork, this is sure to be a book that will inspire kids to think about what their own plans are for someday.

44. Winter at the Door - Sarah Graves

My comments:  You have to like the protagonist in order to like the book, usually, and I didn't like this protagonist.  Lizzie Snow has quit her detective job on the Boston Police force to come to Bearkill, Maine to be some sort of deputy-side-kick to the long-time sheriff.  Small town Aroostook County, way up in the willy wacks of Maine.  She has an ulterior motive: to find her niece - her only living relative -  who's been missing (abducted?) for the last eight-or-so years and for some reason Snow thinks she's in northern Maine. No backstory, no further information...... Her ex-boyfriend, another cop (and for me, another not-really-likable character), appears on her doorstep.  One incongruous mishap leads to another; there's really no mystery because it's all laid out for you and what isn't is quite easy to figure out;  and it all leads up to one trek through the woods in your typical blizzard and then many pages of "a week later" explanation, tying up all the leftover questions within a conversation or two.  This appears to be the first in a series.  Will I read another?  Perhaps - I did like the setting very much....Graves, who lives in Maine, nailed that part of it as well as many of the characters you might run into.

Goodreads synopsis:  Perfect for fans of Jenny Milchman, Linda Castillo, and Lisa Gardner—the first book in a suspenseful new crime thriller series featuring the tough but haunted police chief Lizzie Snow, a big-city cop with a mission, taking on a small town with a dark side.
Moving from Boston to remote Bearkill, Maine, isn’t homicide cop Lizzie Snow’s idea of a step up. But breaking away from tragedy and personal betrayal is at least a step in the right direction. Her dead sister’s fate still torments her, as does her long-missing niece’s disappearance. Lizzie hopes to find the mysteriously vanished child here, amid the coming ice and snow. But in the Great North Woods, something darker and more dangerous than punishing winter is also bound for Bearkill.
The town is a world apart in more than distance—full of people who see everything, say little, and know more than they’ll share with an outsider. The only exceptions are the handsome state cop who once badly broke Lizzie’s heart and desperately wants another chance—and Lizzie’s new boss, sheriff Cody Chevrier, who’s counting on her years of homicide experience to help him solve his most troubling case, before it’s too late.
A rash of freak accidents and suicides has left a string of dead men—all former local cops. Now the same cruel eyes that watched them die are on Lizzie—and so is the pressure to find out what sort of monster has his hooks in this town, what his ruthless game is, and just how brutally he’ll play to win. Whatever the truth is, its twisted roots lie in the desolate backwoods of Allagash County: where the desperate disappear, the corrupt find shelter, and the innocent lose everything. It’s there that a cunning and utterly cold-blooded killer plans the fate of the helpless lives at his mercy—one of whom may be the lost child Lizzie will do anything to save. As a blizzard bears down, and Bearkill’s dark secrets claw their way to the surface, Lizzie gears up for a showdown that could leave the deep, driven snow stained blood red.
Posted by Chris at 8:16 PM No comments:

Rating/Time
Wide/Limited release
Viewed date at
RT Critic:    Audience:
Cag:  6/Awesome  5/Loved it  4/Liked it a lot  3/Liked it  2/It was okay  1/Didn’t like it
Directed by
Studio
Based on the book by

RT Summary:
Posted by Chris at 3:05 PM No comments:

Rating/Time
Wide/Limited release
Viewed date at
RT Critic:    Audience:
Cag:  6/Awesome  5/Loved it  4/Liked it a lot  3/Liked it  2/It was okay  1/Didn’t like it
Directed by
Studio
Based on the book by

RT Summary:
Posted by Chris at 3:03 PM No comments:

My comments:  Judy Moody is a riot...but even funnier is her brother, Stink.  It was fun getting reacquainted with Judy, her family, her friends,  and her antics in this 12th book of a really wonderful series.  Keep 'em coming, Ms. McDonald!

Goodreads synopsis:  It’s Backwards Day, so Judy Moody double-dares herself to become Queen of the Good Mood for one whole week. Can she do it?
Will the real Judy Moody please stand up? In honor of Backwards Day, Judy Moody decides to turn that frown upside down, make lemonade out of lemons, and be nice to stinky little brothers. In fact, Judy becomes a NOT moody, cool-as-a-cucumber neat freak for one whole entire day. But when her combed hair, matching outfits, and good moods hang around for days after, her friends begin to worry. Could this smiley Judy be an imposter?
Posted by Chris at 8:32 AM No comments: