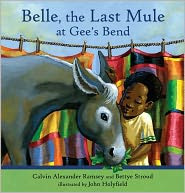 A Civil Rights Story
Illustrated by John Holyfield
Candlewick Press, 2011
HC $15.99
32 pages
Rating: Wonderful/5
Endpapers: Deep Cranberry
Author’s Note
Illustrations: Acrylics – no white (happy sigh) – most pages have one side full illustration, opposite are text on soft “sponged” colors. Some double pages are ¾ illustration, ¼ text and one is a double page illustration with text across the top
Title page: Blue sky framed with trees and the corner of the general store.
Setting: Contemporary Gees Bend, Alabama
OSS: A young boy, while waiting for his mom to purchase a famous quilt from Gee’s Bend, learns of how the mule he’s watching came to pull the wagon that pulled Dr. King’s body down the streets of Atlanta to his funeral.
1st line/s: “Alex sat on a bench outside the store. He wanted to go and play, but his mother had told him to wait for her. There was nothing to do on the porch but an old mule eating in the garden across the street. There was no breeze. Not a leaf moved in the chinaberry trees. It was so still that Alex could hear the mule munching on a row of bright collard greens."
This must be used for MLK Day in January, with a few days preceding it learning about Gee’s Bend!
Posted by Chris at 6:12 AM No comments:

Well, I should have paid more attention to the reviews. This was a really silly/stupid movie. Sure, it was fun to watch and had some really funny spots, but it wasn’t even worth the $7.00 matinee price. Reese Witherspoon is really pretty. Like she would not have suitors lining up! Really. So she’s met two different guys and is dating them both … and they happen to be best friends and topnotch CIA operatives. THEY know they’re both dating her…SHE doesn’t. So they’re surveilling each other, mad at each other, competing big time. Yes, there were some really funny places. It was entertainment, but certainly not great entertainment. I had an Orleans free popcorn, and the best company in the world, so it was a fine way to spend a couple of hours on a Saturday afternoon.
Posted by Chris at 6:35 AM No comments:

Setting:  An island off the coast of Washington state, big enough for its own high school.
OSS:  When Isobel's mother marries a guy with a "hot" son her own age, she has to move to a strange high school during her senior year and deal with weird, ghostly things that happen in the huge old mansion she must now inhabit.
1st sentence/s:  "When the minister asked if anyone knew any reason why these two shouldn't be married, I should have said something.

Isobel's mother is a self-centered woman who has never been a particularly good mother, and this sort of things irritates me (of course).  It's a real happenstance, and I like that it was written that way.  The new stepfather, Dick, has only been widowed for seven months, so that's cause for head scratching and great and immediate questioning about his   The developing relationship between Isobel and her stepbrother Nathaniel is.....interesting.  And then there's the weird happenings in Isobel's bedroom - the room that used to house Nathaniel's drowned sister.
A fast read, perfect for reluctant teen readers. I found it predictable, but I've read many similar books. It went fast and was interesting, but isn't a standout for me. There were also a number of misspellings that hadn't been caught or edited, and this bothered me (although it shouldn't have!)
Posted by Chris at 7:10 AM No comments:

Setting:  Washington, DC (with lots of description and place references)
OSS:  Spero Lucas is hired by a local marijuana kingpin to locate some stolen pot shipments.

Spero Lucas is a very likable, interesting, real character.  At 29 years old he has returned home from his stint in the Marines in the Middle East to his hometown of Washington DC.  He has been raised in the Greek Orthodox tradition and is still  quite spiritual.  He comes from a mixed and blended family, three of the four siblings had been adopted.  He visits his father in the cemetery frequently, and is very close to his school-teacher older brother.

Spero has discovered that he's good at finding things.  He takes photos, draws street plans, makes notes in his black moleskin notebook.  He thinks outside the box.  He makes mistakes --- but learns from them.  He has Marine buddies that hang out with him at the local American legion, and he has them help him out.  He's an avid bicycler and kayaker, we see a lot of DC from this perspective.  He drinks, he loves women, good food, and his city.  He is thoughtful and perspective.  I really like his character, and I like his humanity.

Pelecanos is great with character creation throughout the book.  You get to know the bad guys, the peripheral characters and all their flaws. I'm really looking forward to the second book in this series.
Posted by Chris at 6:13 AM No comments:

Setting:  Contemporary suburban Connecticut
OSS:  Glen Garber, a self-employed contractor, tries to deal with the death of his wife under mysterious circumstances.

Glen Garber's wife, Sheila, is killed in a horrible auto accident that also claims the lives of a father and his young son.  But when Glen discovers that his responsible, law-abiding wife was supposedly extremely drunk and caused the accident, life begins to tilt.  After his 8-year old daughter, Kelly, goes on a sleepover and overhears a secret telephone conversation, everything and anything begin to happen.  More deaths.  More mystery.  Surprise after surprise, right down to the very end.  This is a roller coaster ride of a story, and that this poor protagonist kept his mind together at all is very surprising.  There are a couple of places that I felt, "what was he thinking?" but would probably have really come about in such strange situations that happened.  This was a really good story, really wonderful to listen to, that I brought in from the car to finish in the house (a bit unusual for me).
Posted by Chris at 11:31 AM No comments:

Setting:  a small community on the Union River, near Ellsworth, Maine
OSS:  Two voices alternate as this story unfolds - Aimee and Alan - who know that an evil force (the River Man) is trying to possess a friend, the same evil force that took the life of Aimee's mother and countless others through the past centuries.
1st sentence/s:  You are mine.  You are all mine.  These are the words I hear every single freaking morning since my friend Courtney's dad died. They slither around inside my brain all day until I think I'm going crazy, and today is no exception.

I enjoy reading Carrie Jones' novels....the setting is where I lived for so many year.  This time, in her acknowledgements, she mentions Amilie Bacon, one of my past students at MDES.  That was pretty exciting.
Posted by Chris at 2:40 AM 1 comment:

MOVIE - One for the Money

In this one, Stephanie ends up looking for her ex-husband, Dickie Orr, who has mysteriously disappeared....and she seems to be the only possible suspect. Then his business partners start dying, burned to a crisp or drowned. This one's got a little Morrelli and a lot of Ranger - the two of them pitching in to take care of poor little (stupid) Stephanie.

The books seem to be getting sillier and sillier. At first, as silly as they seemed, they were more plausible. And I think I'm getting really tired of Lula, though there were some points, as I was listening, that I laughed right out loud because something would really strike me funny. The story certainly passes the time on long drives, and is not at all difficult to listen to....not much thinking involved.
Posted by Chris at 2:37 AM No comments:

Yes! This depicts what I've believed for a couple of years now!
Thursday, 2/2/12 at Crossroads (by myself)
Posted by Chris at 2:36 AM No comments: 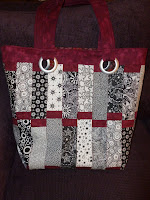 I took this class today, Friday, Feb. 3, 2012.  It was at Quilter's Market, taught by Linda Powell.  There  were just three of us, an all-day clsss, and I finished the bag completely.  I worked for about an hour in the morning prepping the smaller blocks, and Linda taught us lots of tricks.  She created the pattern herself.  It sure feels good to finish the bag COMPLETELY in one day.  YAY!!!
Posted by Chris at 6:27 PM 1 comment: