65. The Wrath & the Dawn by Renee Ahdieh

First line/s:  "It would not be a welcome dawn.  Already the sky told this story, with its sad halo of silver beckoning from beyond the horizon."

My comments:  A little heavy on the romance, but the main character - many of the characters, actually - were sassy, with great senses of humor....real.  I love the setting of ancient times, and the introduction of magic, though a little more of that would have been welcome.  Kahlid was a little too silently smoldering, but I think a lot of YA females will enjoy that.  Decent storytelling!  I look forward to the second in the series to see what directions the plot will take and what happens to some of the more endearing - and not-so-endearing characters.
Note:  the illustration/photo of Shahzrad in the cover and front endpaper is perfect - sassy, gorgeous, young....and I loved the cover, too....

Goodreads Summary:  One Life to One Dawn.
In a land ruled by a murderous boy-king, each dawn brings heartache to a new family. Khalid, the eighteen-year-old Caliph of Khorasan, is a monster. Each night he takes a new bride only to have a silk cord wrapped around her throat come morning. When sixteen-year-old Shahrzad's dearest friend falls victim to Khalid, Shahrzad vows vengeance and volunteers to be his next bride. Shahrzad is determined not only to stay alive, but to end the caliph's reign of terror once and for all.
Night after night, Shahrzad beguiles Khalid, weaving stories that enchant, ensuring her survival, though she knows each dawn could be her last. But something she never expected begins to happen: Khalid is nothing like what she'd imagined him to be. This monster is a boy with a tormented heart. Incredibly, Shahrzad finds herself falling in love. How is this possible? It's an unforgivable betrayal. Still, Shahrzad has come to understand all is not as it seems in this palace of marble and stone. She resolves to uncover whatever secrets lurk and, despite her love, be ready to take Khalid's life as retribution for the many lives he's stolen. Can their love survive this world of stories and secrets?
Inspired by A Thousand and One Nights, The Wrath and the Dawn is a sumptuous and enthralling read from beginning to end.
Posted by Chris at 6:07 PM No comments:

When I finally figured out what to carve for my first plant it was easy.  MY FIRST PLANT!  And I actually drew it myself....reminiscent of the plant that I paper-punched for Laura's wedding seating cards!

I hunted in three different stores for the right container.  It had a red cover, but was the perfect size.  I wish I had thought to purchase some spray paint...perhaps gray, to hide in the rocks, but I'll do that next time.

I made a little pouch to hold the stamp, put them all together and took off looking for a place to plant it.  I'd been looking and thinking about this for awhile, but after I drove into the cemetery I'd been considering I said "nay" and bid it adieu.  Too snaky in the summer, no rocks to create a SPOR, By his time it was getting past dusk...and overcast day made it even darker so I sadly decided to wait until today to find a spot. 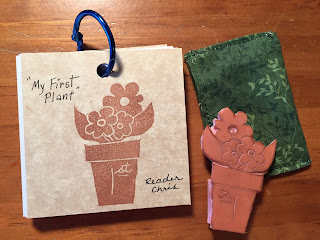 I'd made a reservation at Roadhouse to go see Mockingjay today (Thanksgiving)...and there it was!  The perfect place! 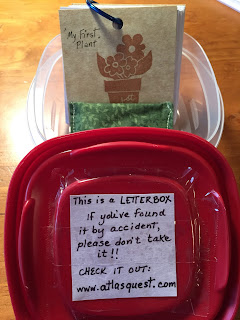 So now MY FIRST PLANT is hidden and posted on AtlasQuest.  I feel like I've hit the big time! 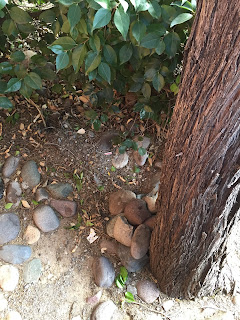 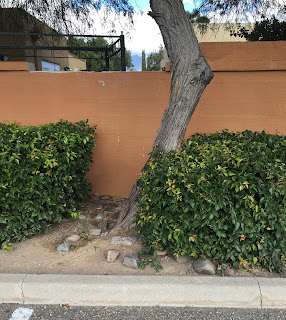 First line/s:  "The king stood in a pool of light, unmoored. This was act 4 of King Lear, a winter night at the Elgin Theater in Toronto."

My comments:  This is a tough one for me to rate.  It's the kind of book I'd like to sit down with a book group and discuss.  Great writing, lots of jumping around (most of it's easy to follow, Mandel must have had to use a wall covered with diagrams to keep things straight...), but there's something a little bit missing.  It's not a book that will be easily forgotten, that's for certain, but it left me feeling I'd missed something (or some things)....

Here are some notes I found later on my phone:  I thought for awhile since finishing this book about what I really take away from it.  This is the kind of book I'd like to sit and talk about with friends.  I bet everyone would think the theme of the book was different than others thought.  There are so many levels, so many relationships, and so many things that I haven't even figured out connecting.  I picture the author having a huge black wall in front of her, creating characters and scenarios and overlapping an circling and layering plot and setting, particularly time.  Time.  Plague.  Why some people get sick and others didn't.  TWhy did they live in public buildings and not in houses they could've easily taken over - for comfort and safety alone.  What had happened to the entire company that they missed each other on the road?  Seems totally imporbable.  What was so important about the glass paperweight?  Didn't seem to fit completely into the story.  Would people really turn on each other the way they did?  And how exactly would an entire world ground to a halt the way it did?  The resources were still there and there had to be people still left that knew how to tap them...

Goodreads Summary:  An audacious, darkly glittering novel set in the eerie days of civilization’s collapse, Station Eleven tells the spellbinding story of a Hollywood star, his would-be savior, and a nomadic group of actors roaming the scattered outposts of the Great Lakes region, risking everything for art and humanity.
One snowy night Arthur Leander, a famous actor, has a heart attack onstage during a production of King Lear. Jeevan Chaudhary, a paparazzo-turned-EMT, is in the audience and leaps to his aid. A child actress named Kirsten Raymonde watches in horror as Jeevan performs CPR, pumping Arthur’s chest as the curtain drops, but Arthur is dead. That same night, as Jeevan walks home from the theater, a terrible flu begins to spread. Hospitals are flooded and Jeevan and his brother barricade themselves inside an apartment, watching out the window as cars clog the highways, gunshots ring out, and life disintegrates around them.       Fifteen years later, Kirsten is an actress with the Traveling Symphony. Together, this small troupe moves between the settlements of an altered world, performing Shakespeare and music for scattered communities of survivors. Written on their caravan, and tattooed on Kirsten’s arm is a line from Star Trek: “Because survival is insufficient.” But when they arrive in St. Deborah by the Water, they encounter a violent prophet who digs graves for anyone who dares to leave.       Spanning decades, moving back and forth in time, and vividly depicting life before and after the pandemic, this suspenseful, elegiac novel is rife with beauty. As Arthur falls in and out of love, as Jeevan watches the newscasters say their final good-byes, and as Kirsten finds herself caught in the crosshairs of the prophet, we see the strange twists of fate that connect them all. A novel of art, memory, and ambition, Station Eleven tells a story about the relationships that sustain us, the ephemeral nature of fame, and the beauty of the world as we know it.
Posted by Chris at 6:27 AM No comments:

2014, Viking Books for Young Readers
391 pgs.
YA CRF
Finished 11/9/15
Goodreads rating:  3.93
My rating: 4
Setting: Contemporary New York State - somewhere between Albany and Poughkeepsie, which are both mentioned more than once.

First line/s:  "It started in detention.  No surprise there, right?"

My comments:  I read this book in one afternoon/evening/late night.  It was hard to put down. It's about PTSD and its effect on a family.  It's powerful and is a wonderful blend of good characterization and excellent plot.  There are two things that keep me from giving this a 5 - and I don't want to dwell on them, only mention them, because this book is really good.  The hard-to-get-to-know, leave-me-alone protagonist becomes instant best friends with Gracie, a girl she knew, but doesnt' remember, when she way little.  Excellent.  However, there is never any mention of any other friends that Gracie might have.  None.  She's not the type of young lady that would be friendless.  What happened to them?  This didn't work for me.  And then there's the ending, or at least the wrapping-it-up part.  Too quickly told, and not quite totally believable to me.  I love happy endings, but I need to feel they could really happen in the way they're told.  Oh well. I will definitely be recommending this book.

Goodreads Summary:  For the past five years, Hayley Kincain and her father, Andy, have been on the road, never staying long in one place as he struggles to escape the demons that have tortured him since his return from Iraq. Now they are back in the town where he grew up so Hayley can attend school. Perhaps, for the first time, Hayley can have a normal life, put aside her own painful memories, even have a relationship with Finn, the hot guy who obviously likes her but is hiding secrets of his own.
Will being back home help Andy’s PTSD, or will his terrible memories drag him to the edge of hell, and drugs push him over? The Impossible Knife of Memory is Laurie Halse Anderson at her finest: compelling, surprising, and impossible to put down.
Posted by Chris at 3:49 PM No comments: 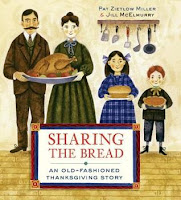 My comments:       I love to check out the new holiday picture book offerings - especially Thanksgiving, which has become so over-shadowed by Christmas and Black Friday!  So it was fun to peek at this new picture book today.
Sharing the Bread is set in the late 19th century, is simple and sweet, with lovely rhyming, rhythmic verses.  Everyone in the family has a job to do in preparation for the meal.  The only religious overtones are at the end when the double-page spread depicts the entire family holding hands around the table. "Fold. Shout. Sit. Pray.  All together on this day." A lovely book. 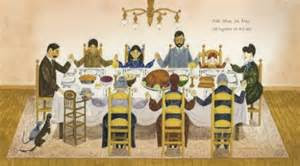 Goodreads:  Celebrate food and family with this heartwarming Thanksgiving picture book. We will share the risen bread. / Our made-with-love Thanksgiving spread. / Grateful to be warm and fed. / We will share the bread. In this spirited ode to the holiday, set at the turn of the twentieth century, a large family works together to make their special meal. Mama prepares the turkey, Daddy tends the fire, Sister kneads, and Brother bastes. Everyone—from Grandma and Grandpa to the littlest baby—has a special job to do. Told in spare, rhythmic verse and lively illustrations, Sharing the Bread is a perfect read-aloud to celebrate the Thanksgiving tradition.
"A warm and wonderful holiday treasure." —Publishers Weekly, Starred"Captures the spirit of a traditional Thanksgiving dinner." —School Library Journal"A delightful holiday book that shows the heartwarming tradition of food and family." —Booklist
Posted by Chris at 6:15 PM No comments: 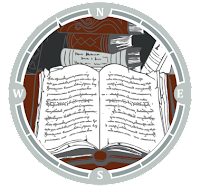 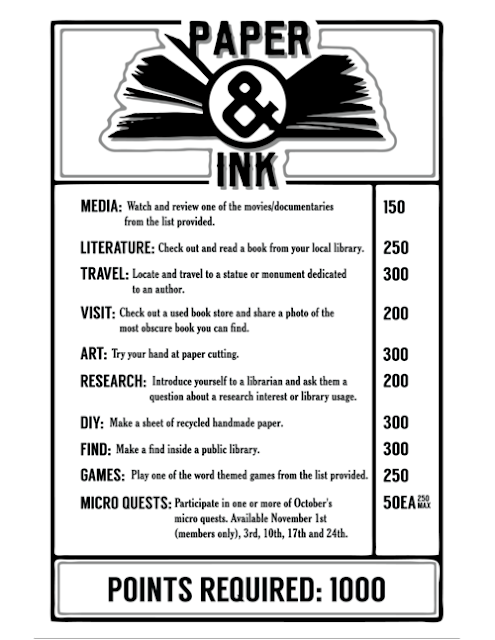