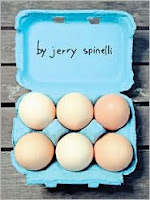 David’s mother has died in a “freak accident.” That’s putting it mildly – she slipped on a wet floor and fell down a flight of stairs. But David’s only 9, and he and his bereaved dad move from Minnesota to the east coast so that David’s grandmother can care for him while David’s father works. David is a mess. He resents his grandmother. His father is only home on weekends. He knows not a soul.

But then he meets Primrose, a 13-year-old free spirit who lives with (and resents) her psychic mother in a teeny tiny house on the end of a road. There’s an old van out in the yard that Primrose takes over for her bedroom. She paints. She decorates. She drags in mismatched furniture.

David and Primrose have an extremely odd relationship, but it works for them. They spend the nights roaming the town – trash-picking, hanging out in the all-night quick stops, visiting with their friend Refrigerator John. This part was a little unbelievable to me. A nine year old sneaks out of his bedroom each and every night and his grandmother, who loves him and worries about him, never discovers this? And they hang out in the home of Refrigerator John and he never questions it, or worries about what will happen to him if he’s found out? Yes, he’s their friend…that’s wonderful, and special. But in this day and age, this sort of arrangement between adults and kids would NOT look good……

The story was very well read in two voices, a young girl doing David and Primrose, and “older” female voice doing the narrator and grandmother. Easy and enjoyable to listen to. I didn’t think I’d continue on much past the beginning, but it hooked me and I listened happily all the way through. But it was just a bit too unbelievable. I have a student who’s listening to it right now. It’ll be interesting to see what she has to say about it….she’s enjoying it so far.
Posted by Chris at 9:20 AM