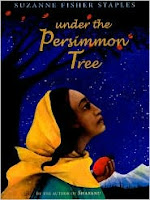 This was a very interesting book, detailing, so sadly, some of the atrocities that have (and possible still are?) taking place under the Taliban in Afghanistan. This story has TWO interesting perspectives. We flip-flop, chapter by chapter, between an American woman living in Peshiwar and an Afghani girls fleeing from her destroyed home in the mountains. Both stories are heartbreaking.

It looks like Najmah has lost her whole family to the Taliban or American bombs. The 12-year old is rescued by fleeing neighbors, disguised as a boy, and set out on a difficult journey to the refugee camps on the Afghanistan-Pakistan border. There is no food, little warmth or shelter, and a deep, deep sadness. Najmah stops talking, but uses her wits and determination to continue.

Nusrat has accompanied her doctor-husband from New York City to Pakistan so that he can help. She has converted to Islam, loves Faiz' family (who love and accept her) and has opened a school for refugee kids while she waits for him to return to her from the war zone, where he is working in clinics.

Najmah and Nusrat's stories progress until they come together. Incredibly sad, but an honest look at what's been going on for the last ten years in Afghanistan, to the population and particularly to the women.

There hasn't been a whole lot written (yet) for kids about what's been going on over there. I am so thankful for books like this. However, I'm such a Breadwinner (Deborah Ellis) fan that I must admit as much as I like Staples' work, I prefer Breadwinner over Under the Persimmon Tree and would recommend it first.

Such unbelievable despair. A whole country of people who have lost entire families, traditions, history, and freedom.
Posted by Chris at 3:12 AM