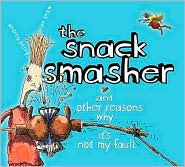 A variety of "vile villains, ruthless roughnecks, scoundrels, scalawags and dastardly deed doers" are described in the 13 poems in this book including people like snack smashers, wicked waitresses, ink drinkers, and snake knotters. Here are a couple:

The Scary-Hair Fairy (MUST use this near SCHOOL PHOTO DAY)

‘Twas the night before pictures – those taken at school –
when kids want their hair to look stylish and cool.

The students were nestled in bed unaware
of what was about to become of their hair.

When up on the dresser top, who should appear,
but that messer of tresses photographers fear.

The Scary-Hair Fairy! That rascally knave!
That scoundrel whose magic makes hair misbehave.

More rapid than spritzing, he’ll straighten your curls.
He’ll give you six cowlicks and bangs all awhirl.

With a twist of his comb and mysterious gel,
you’re helplessly under his hair-raising spell.

He’ll tangle your ringlets. He’ll snarl and he’ll knot
and stiffen and crimp all your hair so it’s taut.

And then he’ll be off spreading split ends and frizz
to the next unsuspecting young Mister and Ms.

Yet as he’s departing, his warning is clear.
He snickers with such a cold scalawag sneer.

“Tomorrow will bring you the bleak prospect of
a school picture only a mother could love!”

That sound you can hear?
At night in the dark?
That isn’t a sneeze, or a burp, or a bark?

It’s loud and alarming?
It keeps you awake?
And causes your bed and your dresser to shake?

That sound is the Snorist.
It means that he chose
to sneak with his tuba inside your dad’s nose.

He won’t ever leave
or stop making noise
since being annoying is what he enjoys.

He’s rude and uncouth,
a bothersome creep,
who wants to make sure no one gets any sleep.

He’ll play on for hours –
six, seven, or more –
each song getting louder and worse than before.

There might be a lull,
but don’t rest too soon…
the Snorist has merely switched to his bassoon!
Posted by Chris at 8:11 PM