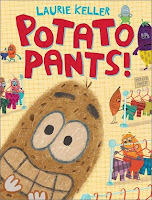 Potato Pants! by Laurie Keller
Poor Potato is afraid to go into the store that's having a potato pants sale, because he's afraid that Eggplant, who pushed him into a wastebasket the day before, will try to push him again!  Funny and cute with a lesson about being brave.

The Potato King by Christoph Niemann
The story of how King Fritz (Frederick the Great, King of Prussia) tricked people into eating potatoes. Illustrated with potato prints!

Pigs Love Potatoes by Anika Denise Illustrated by Christopher Denise
A very cute counting book (from 1 to 10) with great rhyme and rhythm, this story tells of Mama Piggie getting help from all assorts of people in preparing a pot of potatoes and then having everyone enjoy them together.

One Potato by Sue Porter
Four animal friends compete for the one potato left at the end of dinner, but because of unusual, very funny results, no one gets it!

The Greatest Potatoes by Penelope Stowell Illustrated by Sharon Watts
Based on a true story, finicky6 Conrenlius Vanderbilt sent his French fries back to the kitchen so many times that George Crum, the cook, in anger cut the potatoes super thin and fried them until they were crisp, even oversalting them.  Thus was the potato chip invented, in Saratoga, NY!  Not at .

I'm Bored by Michael Ian Black Illustrated by Debbie Ridpath Ohi
A bored little girl finds an equally bored potato, but not matter what wonderful suggestions she gives it (and she gives it a lot of suggestions), he's still bored.

Activities:
Have photocopied outlines of potato pants for kids to color and cut out, then pin them onto a potato!
Give kids each a potato half and have them create potato stamps using straws, skewers, popsicles, and other harmless gougers.  Use acrylic paint as the stamping medium
Use real potatoes when singing One Potato, Two Potato, Three Potato (below).


Down in the Garden

Down in the garden, early in the morning.
See the green leaves growing on the vines.
See the little flowers, turn slightly yellow.
Dig, dig, dig, dig, potatoes you will find!

One potato, two potato,
Three potato, four.
I like mashed potatoes,
May I please have some more?