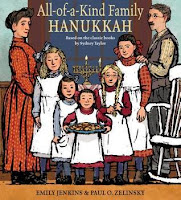 My comments:  This is a lovely picture book about a much-loved series for kids that was written almost 70 years ago.  Sweet story, telling of Hanukkah traditions, a large Jewish family at the turn of the 20th century, and particularly the making of latkes.  Not super crazy about the illustrations, for some reason.... 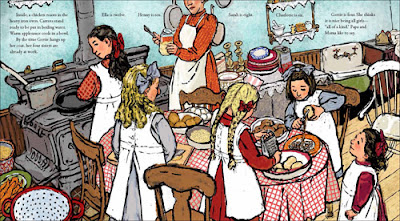 Goodreads:  The beloved characters from Sydney Taylor's All-of-a-Kind Family return in this heartwarming picture book from a critically adored team--perfect for Hanukkah gift-giving!
Acclaimed author Emily Jenkins (A Greyhound, a Groundhog) and Caldecott Award-winning artist Paul O. Zelinsky (Rapunzel) bring the beloved All-of-a-Kind Family to life in a new format. Fans, along with those just meeting the five girls ("all of a kind," as their parents say), will join them back in 1912, on the Lower East Side of NYC, and watch as preparations for Hanukkah are made. When Gertie, the youngest, is not allowed to help prepare latkes, she throws a tantrum. Banished to the girls' bedroom, she can still hear the sounds and smell the smells of a family getting ready to celebrate. But then Papa comes home and she is allowed out--and given the best job of all: lighting the first candle on the menorah.          First published in 1951, Taylor's chapter books have become time-honored favorites, selling over a million copies and touching generations of readers. In this time when immigrants often do not feel accepted, the All-of-a-Kind Family gives a heartwarming glimpse of a Jewish immigrant family and their customs that is as relevant--and necessary--today as when it was first written. Jenkins and Zelinsky's charming compliment to Taylor's series perfectly captures the warmth and family values that made the original titles classics.
Posted by Chris at 2:09 PM