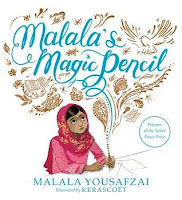 Illustrated by Kerascoet (a husband wife team)
2017, Little Brown & Co.
HC $17.99
40 pgs.
Goodreads rating:  4.47 - 777 ratings
My rating:  5
Endpapers:  BOTH sides are a burst of journal and pencil in white on shiny gold background
Illustrations:  Edge-of-page to edge-of page, though lots of white is used in the background
1st line/s:  "When I was younger, I used to watch a TV show about a boy who had a magic pencil."

My comments:  A biography/memoir for young kids, written by Malala herself.  It's a gentle story of hope and dreams, touching on the ugliness of what happened to her but not dwelling on it.  The illustrations are magical, with lots of shiny gold used throughout and on the endpapers.  Highly recommended. 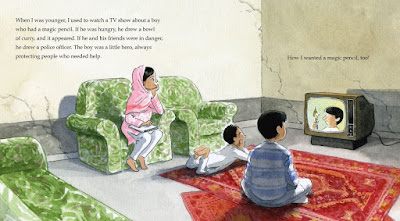 Goodreads: Nobel Peace Prize winner and New York Times bestselling author Malala Yousafzai's first picture book, inspired by her own childhood.
Malala's first picture book will inspire young readers everywhere to find the magic all around them.          As a child in Pakistan, Malala made a wish for a magic pencil. She would use it to make everyone happy, to erase the smell of garbage from her city, to sleep an extra hour in the morning. But as she grew older, Malala saw that there were more important things to wish for. She saw a world that needed fixing. And even if she never found a magic pencil, Malala realized that she could still work hard every day to make her wishes come true.           This beautifully illustrated volume tells Malala's story for a younger audience and shows them the worldview that allowed Malala to hold on to hope even in the most difficult of times.
Posted by Chris at 1:10 PM