MOVIE - Hunt for the Wilderpeople

My comments:  I didn't write my thoughts and comments at the time, stupid me!  I do remember that this had heart and I really enjoyed it a lot.  A great family film from New Zealand. 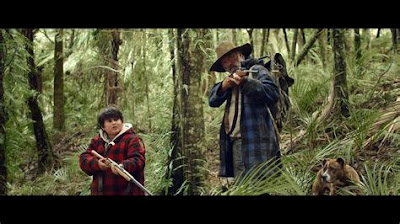 RT/ IMDb Summary:  Raised on hip-hop and foster care, defiant city kid Ricky gets a fresh start in the New Zealand countryside. He quickly finds himself at home with his new foster family: the loving Aunt Bella, the cantankerous Uncle Hec, and dog Tupac. When a tragedy strikes that threatens to ship Ricky to another home, both he and Hec go on the run in the bush. As a national manhunt ensues, the newly branded outlaws must face their options: go out in a blaze of glory or overcome their differences and survive as a family. Equal parts road comedy and rousing adventure story, director Taika Waititi (WHAT WE DO IN THE SHADOWS, upcoming THOR: RAGNORAK) masterfully weaves lively humor with emotionally honest performances by Sam Neill and Julian Dennison. A hilarious, touching crowd-pleaser, HUNT FOR THE WILDERPEOPLE reminds us about the journey that growing up is (at any age) and those who help us along the way.
Posted by Chris at 11:13 AM