6. The Shadows of Ghadames - Joelle Stolz

This book took me to a place that I might have never known about....to a small city in the middle of the Sahara Desert in Libya, Africa, at the end of the 19th century. I went to the computer and looked up Ghadames and Libya to learn a little more. I knew about Ghadhafi, of course. But I didnt' know that Libya is Africa's fourth largest country (about the size of Alaska), that the famous Tripoli (from the Halls of Montezuma.....) is the capital, that it's a conservative Islamic country, and the women still cover themselves completely from head to toe.

The writiing in this short book is really quite lovely, I would have never guessed that it was translated. That means that Catherine Temeson deserves quite a bit of credit for a job well done. There is so much subtle description in the story that I could really, really picture it. The cover is really cool, and the red sketched border is apparently what they used to decorate the interior of their homes - I found some great photographs on websites.

Malika, a twelve-year-old girl, lives with her father, her mother, Meriem, her father's second wife, Bilkisu, and her half brother, Jasim.

"The rooftops of Ghadames are like a city above the city, an open, sunny town for women only, where they walk about, lead their own lives, visit one another, and never talk to men. Twenty feet below, the men walk in the cool shade of the alleyways, conduct business, and never talk to women. These two worlds, my mother often says, are as necessary and different as the sun and the moon. And the sun and the moon never meet, except at the beginning and end of the night."

Malika's father is a businessman who leads caravans across the Sahara to help supply the isolated town with the goods the people need to survive. She really loves her father, and he dotes on her. The story begins with his leaving on a journey, the meat of the story takes place now. A young man is badly injured trying to flee one of the religious clans that don't like his 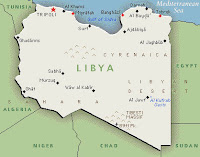 way of thinking. Bilkisu and Milake save him, hide him, protect him, and he, in turn, teaches Malika how to read and write. Somehow the story is not as significant as what is learned about the culture and way of life. I'm guessing it's pretty well researched, I hope it's an accurate portrayal, because it was incredibly interesting, and would be for kids, too. That the women live and cook and party and gossip and go to market completely and totally on the rooftops! ! ! ! Amazing - and I can totally picture it!
Posted by Chris at 5:03 PM