65. Blooming at the Texas Sunrise Motel by Kimberly Willis Holt 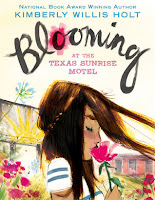 First line/s:  "My name, Stevie Grace, was tattooed inside a giant sun on my dad's back."

My comments:  Definitely another winner by Kimberly Willis Holt!  Though touched throughout with sadness, it isn't a sad story. It's about blooming where you're planted, making the best of everything, seeing the good things there are to see, and learning from the mistakes of your parents and grandparents. And it has a wonderful array of cool characters.  I so enjoyed this story! (By the way, she's actually an eighth grader and says she's thirteen at one point...)

Goodreads synopsis  Twelve-year-old Stevie's world changes drastically when her parents are tragically killed and she is forced to live with her estranged grandfather at his run-down motel. After failed attempts to connect with her grandfather, Stevie befriends the colorful motel tenants and neighbors. Together, they decide to bring some color and life to the motel by planting a flower garden, against Stevie's grandfather's wishes. It will take Stevie's departure before her grandfather realizes just how needed she is by everyone.
Posted by Chris at 2:25 PM