MOVIE - Only the Brave

My Halloween Night movie, haven't missed one in 15 years!
PG-13
Wide release 10/20/17
Viewed 10/31/17 at Carlisle 8
IMBd:  8.1/10
RT Critic:  90  Audience:   93
Critic's Consensus:  Only the Brave's impressive veteran cast and affecting fact-based story add up to a no-frills drama that's just as stolidly powerful as the real-life heroes it honors.
Cag:  5/ Story was so well done, acting was superb, and nothing was nicey-nicey cleaned up
Directed by Joseph Kosinki
Studio:  Columbia Pictures

My comments:  What a powerful, well done movie, a lovely tribute to the Granite Mountain Hotshots of Prescott, Arizona. It would be a terrible shock to go to the movie without having a clue about the ending and even then, of course, it's hard to conceive.  What brave, honorable, hard-working men.  Men with families, senses of humor, dedication.  The actors that portrayed them did a wonderful job.  I've been to and through Prescott (Press-kit) many, many times; the first one with Steve and the kids when we left Jerome and twisted around and around the mountains, not knowing where we'd end up.  It was Prescott.  The last time I was there was almost exactly two years ago, on my way home for a letterboxing event in Lake Havasu.  I remember I woke up to snow and hightailed it back to Tucson without looking for a single letterbox!
How, I wonder, did they film the forest fire scenes?  It looks like it was filmed in and around Santa Fe.  The ferocious flames were unbelievable, and made what happens so, so real and terrifying.  Incredible movie-making.  So hard to rate this film! 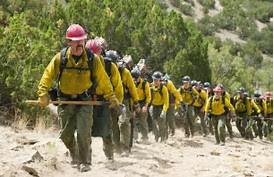 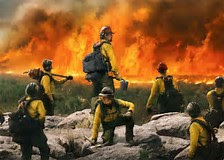 RT/ IMDb Summary:   Granite Mountain Hotshots, is the heroic story of one unit of local firefighters that through hope, determination, sacrifice, and the drive to protect families, communities, and our country become one of the most elite firefighting teams in the country. As most of us run from danger, they run toward it--they watch over our lives, our homes, everything we hold dear, as they forge a unique brotherhood that comes into focus with one fateful fire.