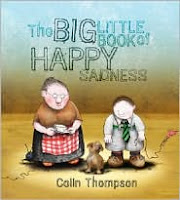 Published: Sept, 2008
For: (See note below)
Rating: 4
Read: Jan. 2009
Endpapers: Tiny brown and white print with pawprints (after I read the book and looked again I realized the prints were of a 3-pawed dog with a "peg" leg - clever)
Font: Cool - looks like hand printing
Australian

Round, roly-poly George lived with his grandmother and was very lonely and sad. "Most Friday afternoons on his way home from school, in that time before the weekend when lonely people realize just how lonely they are, George visited the dog shelter." (Boy, do I know what he means!) The very last cage in the back and bottom of the shelter was where the dogs were kept that were about to be euthanized. That is where he found 3-legged Jeremy - another lonely soul. George and his grandmother took Jeremy home and built him three different kinds of new legs. And life was to be much better for many years to come for them all. A friend at last. And even George and his grandmother's relationship seemed closer after Jeremy's arrival.

Gentle humor. Funky illustrations - very brown. I really like this a lot.

NOTE: It mentions the fact that Jeremy's about to go to "the big kennel in the sky" a number of times, so unless you want to explain that to very young children, I'd stick with older ones you know will understand the idea of euthanasia.
Posted by Chris at 6:43 PM