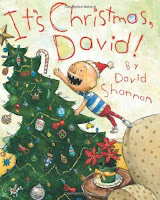 Poor David - especially at Christmastime! He can't do anything he wants, and even indulges in a bit of naughtiness (including, it appears, peeing his name in the snow). However, it's only in his dreams that he's rewarded with a lump of coal - Christmas morning is quite lucrative for him.

Filled with humor and bright Christmas colors, It's Christmas, David, is hilarious. (NOTE: I can't stand his pointy, gapped teeth. Yuck, they look rotten and lessen his appeal.)

This is the fourth "No David" book after 1998's No David, then David gets in Trouble and David Goes to School.