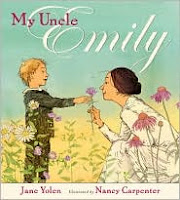 Illustrated by Nancy Carpenter
Philomel Books, 2009
$17.99
32 pgs.
For: Lovers and discoverers of Emily Dickinson's poetry (including those who don't "get" her poems!)
Rating: 4.5
Endpapers: Rosy cranberry
Illustrations: "Pen and ink and digital media." They look old-fashioned and really work beautifully with the story and subject.

Based on facts that Jane Yolen has researched, we are treated to a little bit of the life of Emily Dickinson and of the people who loved her, the lives she touched. It explains what a "recluse" is, and gives us a wonderful glimpse into the possibilities of her quiet personality.

When she givers her six-year old nephew (and next-door neighbor), Gib, a dead bee and a poem to take to school to share, he feels obligated to do so - even though he doesn't understand the poems and knows that his classmates probably won't either. When one of the boys makes fun of his aunt (she refers to herself as Uncle Emily), he socks him in the nose. Not wanting to tell the truth at a family gathering that night, he omits the fighting part of the story, buy Uncle Emily is the one that figures out there's something missing. And she gets it out of him in with a poems and gentle kindness.

There's a note at the end entitled "What is True About this Story."

A for-sure addition to reading aloud the poems of Emily Dickinson to kids! Many love her poems, some have glimmers of understanding, but many screw up their faces and say, "I don't get it." This story should be included! For sure.

What a lovely cover illustration!
Posted by Chris at 8:21 AM