My comments:  I was a little confused at first, which unsettled me a bit.  So it took me about the first half of the film to get into it and relax.  Once I completely realized what was happening, I went with the flow.  There was some interesting cinematography, juxtaposing conversations in two different places on the same screen in a really interesting way.  Quickie, almost cameos, by some really good actors.  All in all, I'm glad I went.  I also realized that this beautiful old theater in downtown Carlisle must have been created by the same architect that created the Critereon in Bar Harbor, Maine.  They are so alike! 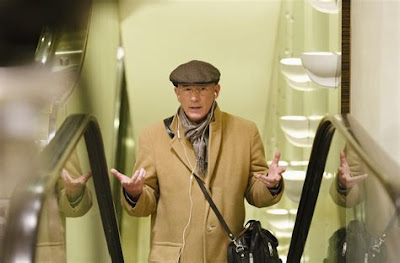 RT/ IMDb Summary:   Norman Oppenheimer is a small time operator who befriends a young politician at a low point in his life. Three years later, when the politician becomes an influential world leader, Norman's life dramatically changes for better and worse.
Posted by Chris at 7:06 PM