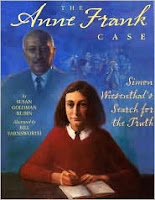 This is the story of Simon Wiesenthal, his harrowing life through many concentration camps during the Holocaust and his determination to find and prosecute Nazi's in the aftermath. In 1958, when a group of Neo-Nazi's booed a play about ANNE FRANK, he set out to prove that she WAS a real person, that her diary was not fabricated, as they claimed. That is the premise around which the book is written, going back and forth between different times in his life and his attempts to find the Nazi who arrested the Franks and his work helping to ensure that the Holocaust will never be forgotten. He died in 2005, at 96 years old.

The illustrations are dark and beautifully done. There is a resource list, a glossary, and additional information at the end of the book.
Posted by Chris at 12:31 PM