My comments:  Very impressive movie, though overly long.  There were two scenes with Jared Leno, the second one seemed endless - I'm sure it was to show off his creepiness and it sure was creepy.  Ryan Gosling is an amazing actor.  Period.  It was wonderful to see Harrison Ford reprising his original role 30 years later, but Ryan  Gosling certainly stole the show.  I remember enjoying the first Blade Runner, but I really loved this one.  Creepy and thought provoking and dark, convoluted, strange, and violent - a great package. 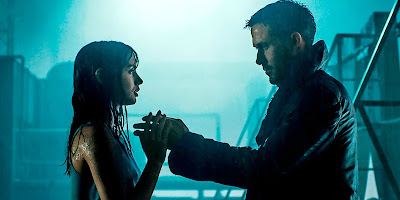 RT/ IMDb Summary:  Thirty years after the events of the first film, a new blade runner, LAPD Officer K (Ryan Gosling), unearths a long-buried secret that has the potential to plunge what's left of society into chaos. K's discovery leads him on a quest to find Rick Deckard (Harrison Ford), a former LAPD blade runner who has been missing for 30 years.
Posted by Chris at 9:41 AM