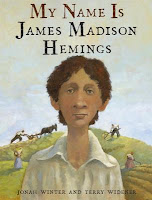 Illustrated by Terry Widener
2016, Schwartz & Wade Books
Goodreads rating: 4.26 - 151 ratings
My rating: 5
Endpapers Front:  Brown / Back: Dark Green
Illustrations:  Acrylic on Bristol board.  Fantastic.
1st line/s: "My mother, Sally Hemings, was herself born into slavery, as had been her mother, my grandmother Elizabeth."

My comments:  Here is a picture book for older readers (we need more of them!) that doesn't tiptoe around the truth.  Yippee, Jonah Winters!   Beautifully told from the point-of-view of James Madison Hemings as a child, he tells how he feels to be "owned" by his father, treated a bit better than the other slaves at Monticello, but nowhere near like Jefferson treated his white grandchildren.  Terry Widener's illustrations are right-on, perfect for the text.  Usually Jonah Winter's mother, Jeanette, does his illustrations, but as much as I LOVE her work, I really like the way this book is presented as a whole. It was a brave topic to be tackled for a children's picture book and Jonah Winter did an admirable job.

Goodreads:  Here’s a powerful historical picture book about the child of founding father Thomas Jefferson and the enslaved Sally Hemings.
In an evocative first-person account accompanied by exquisite artwork, Winter and Widener tell the story of James Madison Hemings’s childhood at Monticello, and, in doing so, illuminate the many contradictions in Jefferson’s life and legacy. Though Jefferson lived in a mansion, Hemings and his siblings lived in a single room. While Jefferson doted on his white grandchildren, he never showed affection to his enslaved children. Though he kept the Hemings boys from hard field labor—instead sending them to work in the carpentry shop—Jefferson nevertheless listed the children in his “Farm Book” along with the sheep, hogs, and other property. Here is a profound and moving account of one family’s history, which is also America’s history.          An author's note includes more information about Hemings, Jefferson, and the author's research.
Posted by Chris at 6:46 PM