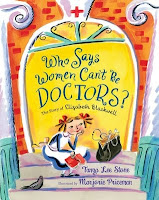 The Story of Elizabeth Blackwell
illustrated by Marjorie Priceman

Ella (6 yrs. old) says:  "I liked the book because she was the first woman doctor.  It was hard getting there, but she worked harder and harder and then she got there."


2013 Christy Ottaviano Books, Henry Holt
HC$16.99 Carlisle's Bosler Library
40 pages
Goodreads rating: 4.28
My rating: 4/ Super story
Endpapers:  Dark royal blue
Title Page:  Sweeping across the double pages are a stethoscope, necklace, bonnet, open book, bottles of medicine - plus font that is cursive-y.
Illustrations: Unfortunately, a little too Chris Raschka-y for me, though Ella liked them a lot and noticed  some of the details well before I did.
1st line:  I'll bet you've met plenty of doctors in your life.  And I'll bets lots of them were women."

Goodreads: In the 1830s, when a brave and curious girl named Elizabeth Blackwell was growing up, women were supposed to be wives and mothers. Some women could be teachers or seamstresses, but career options were few. Certainly no women were doctors.   But Elizabeth refused to accept the common beliefs that women weren’t smart enough to be doctors, or that they were too weak for such hard work. And she would not take no for an answer. Although she faced much opposition, she worked hard and finally—when she graduated from medical school and went on to have a brilliant career—proved her detractors wrong. This inspiring story of the first female doctor shows how one strong-willed woman opened the doors for all the female doctors to come.

My comments on Goodreads: I really like the way that Elizabeth Blackwell's story is told in this charming picture book.  My 6-year old granddaughter loved it, and I will read it to my fourth grade class and talk about the woman AND about the way the book was written...the inserted quotes, using prepositions to begin sentences, the use on incomplete sentences and their impact on the story. Priceman's illustrations are not my favorites - as with Chris Rashka's I find them a little too abstract (although my favorite art is abstract), it doesn't work for me in a picture book.
Posted by Chris at 7:30 AM